Whilst looking through the stack at BIAD a while back I came across a beautifully covered book, so I took it from the shelves and began to look through it. The book was bound in deep green buckram cloth with an elaborate gold picture and title embossing which read, ‘Fairyland, Pictures from the Elf-World’ by Richard Doyle. Even the edges of the pages were gilded.

Looking through I was charmed by the richly coloured and incredibly detailed illustrations that accompanied Allingham’s poem, and at that stage I had not realised the significance of Richard Doyle’s name and to what he had been to the world of illustration during the Victorian era.

Doyle had started having commercial success with his illustrations in the 1830’s, but it was in the 1840’s that he made his name as a fairy tale illustrator. He illustrated a string of story books during the 1840’s and 1850’s one of the most well-known being Ruskins ‘The King of the Golden River’ (1850). Doyle not only illustrated books, but worked on ‘Punch’ magazine. He drew the cover for the first issue and did the artwork for the masthead, which went unchanged for over a century.

With regard to his illustrative work, Doyle found himself in the right place at the right time and was blessed with an aptitude  for visually portraying fantasy and folk tales. At the time he had a vision that allowed him to perhaps view things from a child like perspective and indeed for a child’s perspective and that was unrivalled. His masterpiece is undoubtably ‘Fairyland, Pictures from the Elf World’. It included a poem by William Allingham, printed by Edmund Evans and published by Longman in time for Christmas in 1869 (dated 1870).

It has 16 colour plates and 36 line illustrations plus title page and apparently Doyle was given a completely free hand. This shows through, the illustrations express naivety and romanticism befitting  Allingham’s poem. It has been described as one of the finest examples of Victorian book production.

A rehearsal in Fairy Land. A musical elf teaching young birds to sing.

So to fairies – what are fairies and elves? There are many interpretations of  fairies and elves, but the general consensus of opinion is that they are very small human like creatures with wings. They are extremely long-lived and it is suggested that they have the power to cast spells. Elves are often cited as being cautious creatures, fairies on the other hand are renowned for their mischievous nature. The two images, by Doyle, below seem to debunk this slightly. The young Elf in red trying to climb into the bird’s nest looks positively devilish, whilst the group at rest under the toad stool are very angelic.

Mischievous Elves at rest and play…

Elves originated from Pagen history and are mentioned in many branches of Celtic mythology. Elves are an ancient race of magical, slender creatures with pointed ears and fairies are said to have descended from them. Elves were once very closely associated with the land and with nature and fairies took over many of their roles in this tradition. Fairies live in nature and they are thought to be air, water, fire and tree spirits. These are also the four points that make up a pagan pentagram (air, water, fire and earth) and the fifth point is the spirit, which the fairies incarnate represent. They are found in forests and woodland, behind water falls and under toad stools and even in bracken.

Again in the image above Doyle’s and Allingham’s portrayal of Elves is different to the traditional idea that had been handed down. Their elves still hold true to the physical representation of the creatures, they are slim, nimble with little pointy hats; but they are playful and mischievous too. They are portrayed as being close to nature and having fun with nature, a reciprocal relationship in which the small animals actually play pranks on the elves themselves. 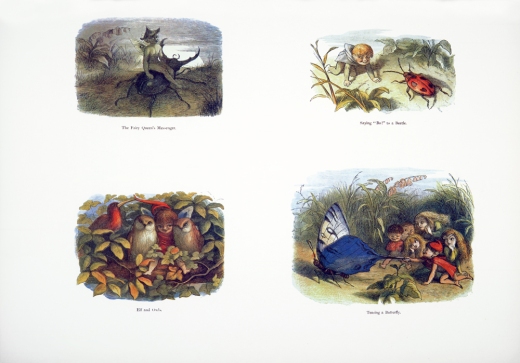 A few of the pages in the book have a collection of images on them. The example above shows four very quaint views of  Elfish life and the image in the top left of the page we get a glimpse of a fairy.

Many of the illustrations are accompanied by wonderfull short passages describing the colorful images, often these passages are keyed in with an elegantly engraved letter with the body of the text delicately running around each engraving. Each image encompasses so much imagination and detail that something new can be spotted by the viewer upon each journey through the book.

So how might we see these creatures around us? It is said that mortals cannot often see fairies because of the division of the worlds, but every now and again we may get a glimpse of them. This will often happen, it is said, at twilight when the veil of the worlds is briefly parted. You could try picking a four-leaf clover and lie quietly awaiting their attention in a wood or coppice. You may try finding a stone with a natural hole coursed by running water in it, just look down the hole and you will see them. Even though fairies are commonly believed to exist today, from the eighteenth century they have been seen less and less. Once firmly ensconced in the minds of men, the fairies may now be in decline. The fact that people may see them less now makes some argue that the fairies will eventually disappear as men stop believing in them.

Twilight…when the veil of the worlds are parted

If this is to be thought of as true then it may be because people stopped believing in them. We may, as adults, have forgotten how to use our imaginations in such enthusiastic ways and we may have lost much of that childlike naivety. I think it could be said that both Richard Doyle and William Allingham had wild imaginations abound and still had some of that childlike naivety. Maybe they did peer into that fairy world for a while, we will never know. Any way, I have my four-leaf clover now and tonight I may make my way to that coppice where I’m sure I will see the veil of the two worlds parted and peer into fairy land…goodnight!

As it is the year of all things British, why not select my first book from the stack on the obscure subject of fresh-water fishes?” And I took the bait.

Even though ichthyology or pisciculture doesn’t float my boat, I appreciate the beauty of the drawings by  A.F.Lydon and the text written by the Rev. W. Houghton.

I particularly like how each chapter begins with an engraving of a scene from a river or lake. According to the preface, the illustrations were made from specimens of fish themselves, some of them even from the British Museum.

You can see for yourself  below how the colours printed more than a hundred years ago still jump out of the pages.

Welcome to the Library Treasures

The aim of this blog is to showcase items from the Library Treasures which is currently housed within the records office at City North campus. To find out more about the collection or to arrange a visit contact hugh.morgan@bcu.ac.uk

BIAD (Birmingham Institute of Art and Design) is steeped in a rich history that dates back to 1843.  It’s a history that has encompassed its formative years as the Birmingham School of Art, to its association with William Morris and the Arts and Crafts Movement, to its modern incarnation spread across various sites as part of Birmingham City University.

For over 150 years, creative talent has been nurtured at BIAD covering fields across the artistic spectrum.

Some of the material that has helped inspire that talent over the years can be found in the varied collection known as the Library Treasures.

Over the course of the blog, we’ll highlight snippets from the Library Treasures and cover a wide range of themes to reflect the diversity of the collection.  Expect scenes from Victorian London, miraculous medicine, flying fairies, Birmingham buildings, fish out of water, and maybe even the odd flying monkey or two.